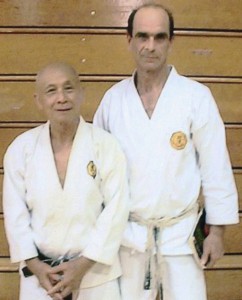 Sensei Ralph Corvino has been a mainstay fixture in Ancaster for over fifty years.

Ancaster High Schools first M.V.P. for football and an exceptional athlete he went on to become a member of the McMaster Marauders football team earning Conference All-Star recognition as well as being chosen player of the decade that he played in.

The Hamilton Tiger Cats acquired him upon graduation but Sensei Corvino decided upon Karate under the direction of the late O’Sensei Richard Kim, as his next athletic involvement.

After decades of study, travelling and competing internationally, he earned Black Belt degrees from Japans Dai Nippon Butoku-kai and the Zen Bei Butoku-kai as well as rank and title of Master of Martial Science.

Sensei Corvino is trained in Shorinji ryu karate as well as Okinawan weaponry and the esoteric arts including Zen Meditation, Tai-Chi, and Chi Kung.

Ancaster Karate is one of the oldest schools in Canada and the first in Ancaster.

Sensei Corvino holds a 9th degree black belt as well as a Masters Degree in Martial Science earning rank from the Dai Nippon Butoku Kai which issued all teaching certificates in Japan prior to WW2.

Students learn form and techniques universally recognized and accepted. The depth and wealth of knowledge provided through decades of study under the greatest master of this century is available.

Sensei Corvino has trained under legendary instructor O’Sensei Richard Kim, as well as other pioneers of modern Karate including Peter Urban and Hidetaka Nisheyama. The internationally recognized language of Karate and most martial arts is Kata.

Instructors at Ancaster Karate have been trained to internationally recognized standards. You will not find young children with black belts here. Any place giving this rank to a child has little to offer, and the worst place for a child is where protective gear is needed.

We do not glorify violence and refrain from indulging in it. After developing champions of tournament competition our training has developed and evolved past that illusion about mastery.

Here children earn reward, rank, and learn skill through class involvement . No one is pitted against another. Sensei’s motto is “who conquers self wins all.”